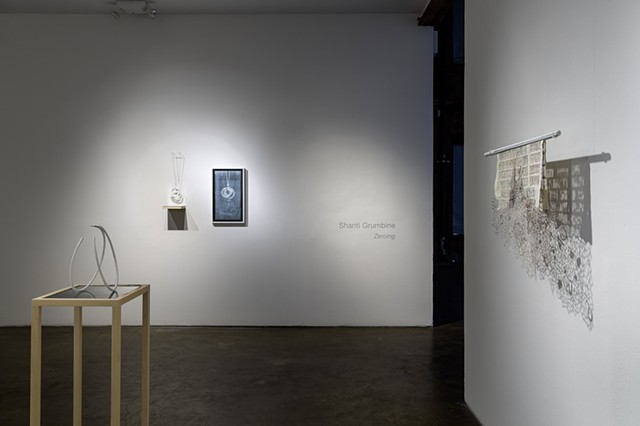 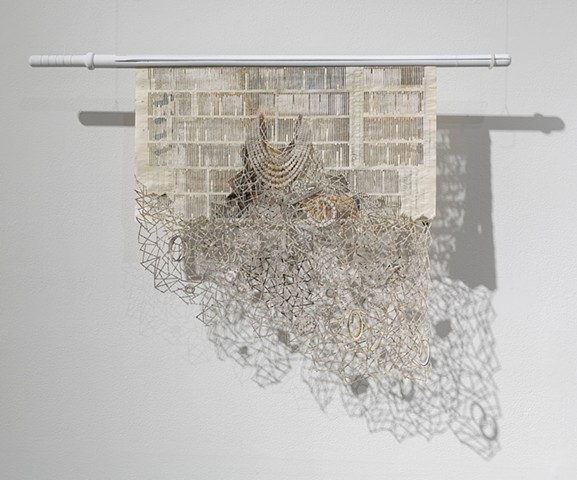 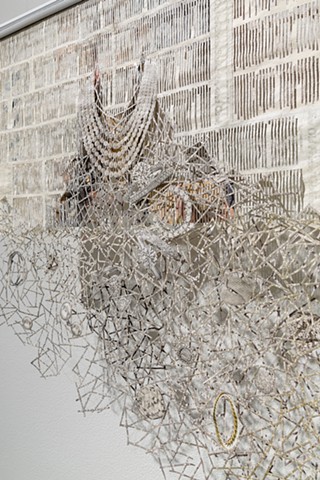 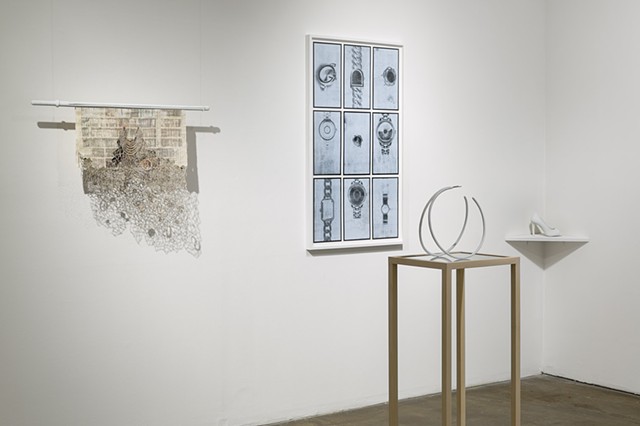 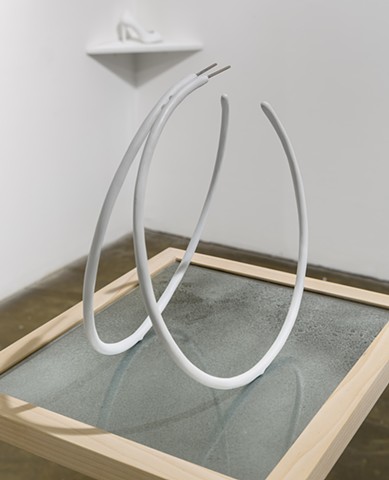 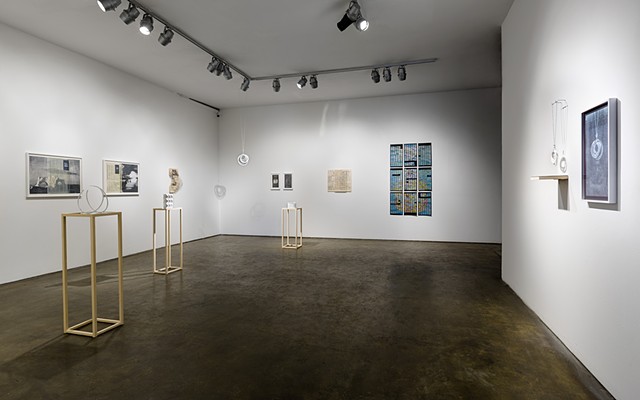 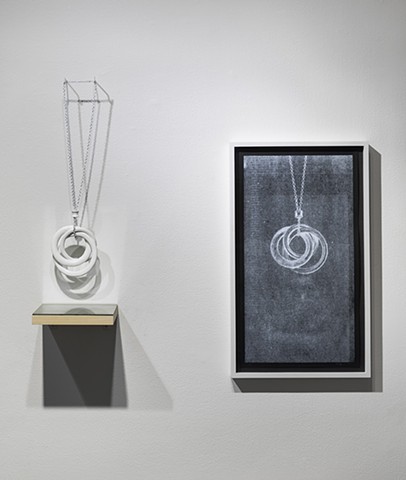 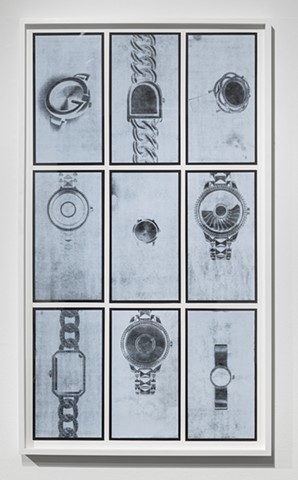 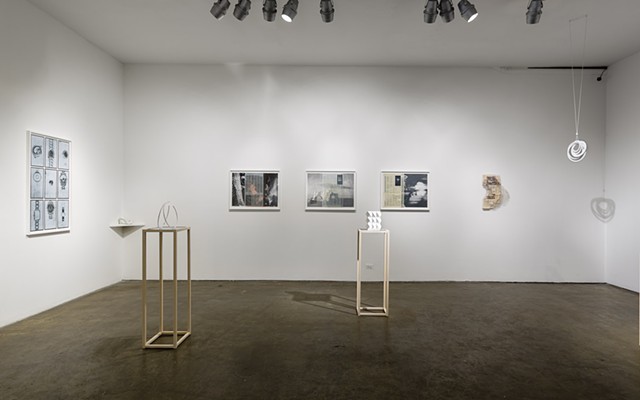 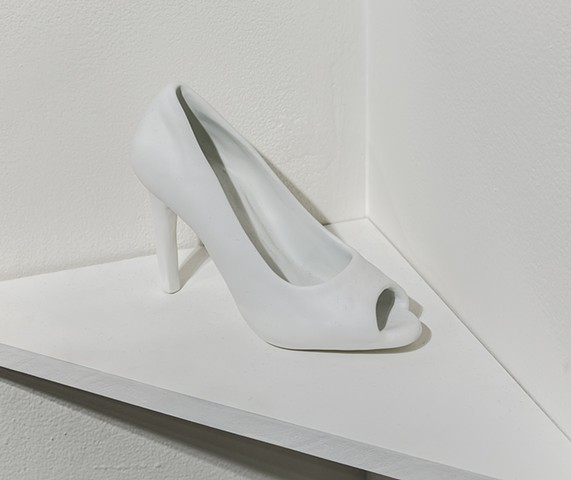 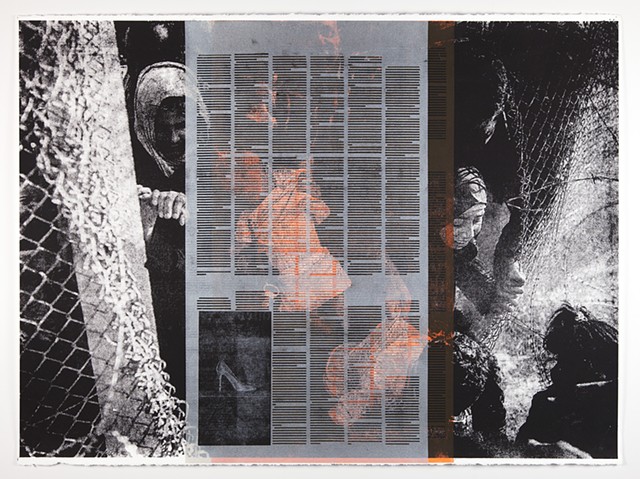 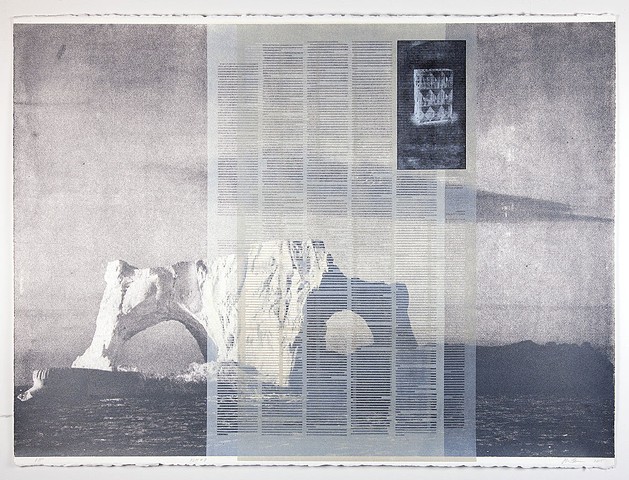 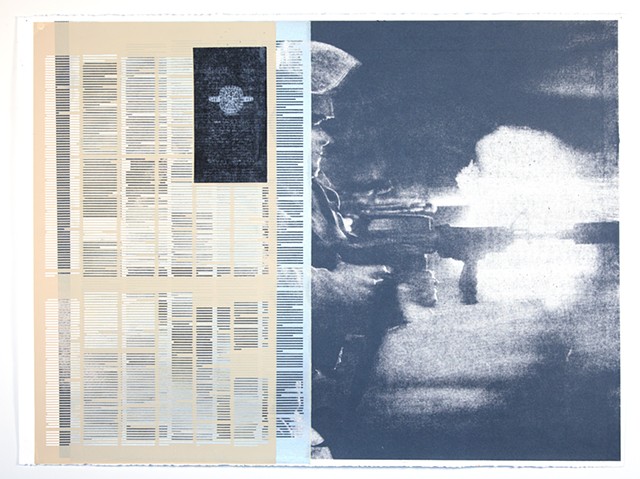 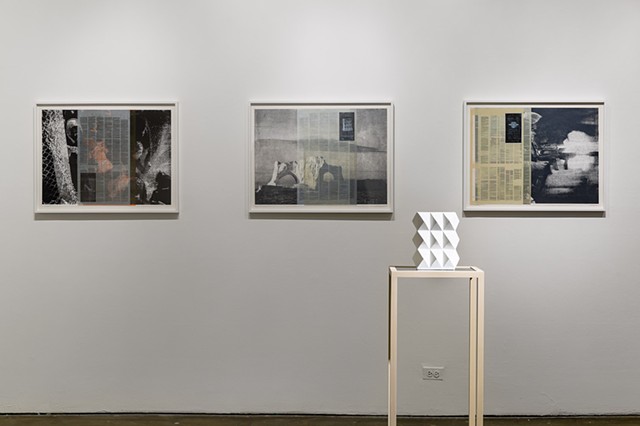 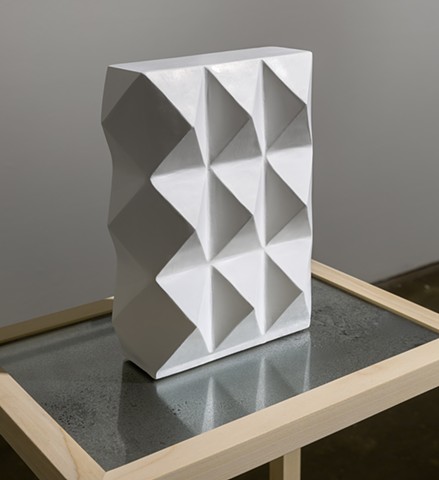 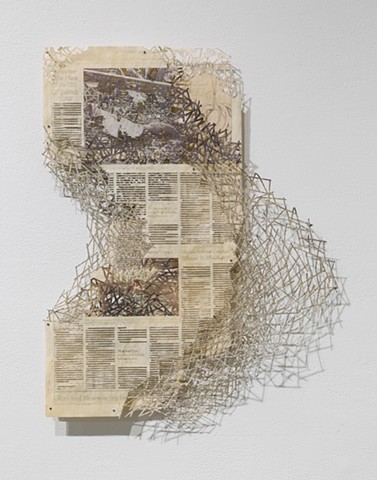 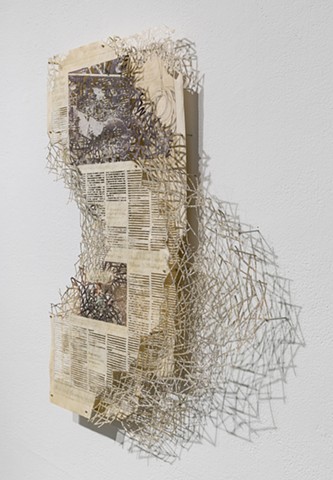 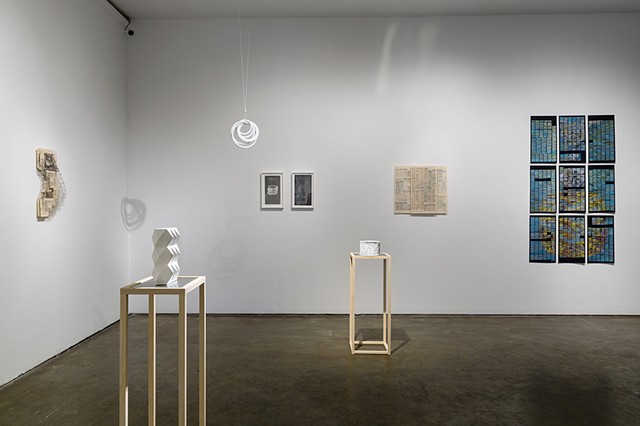 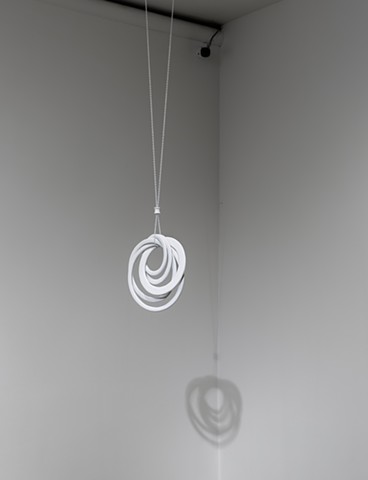 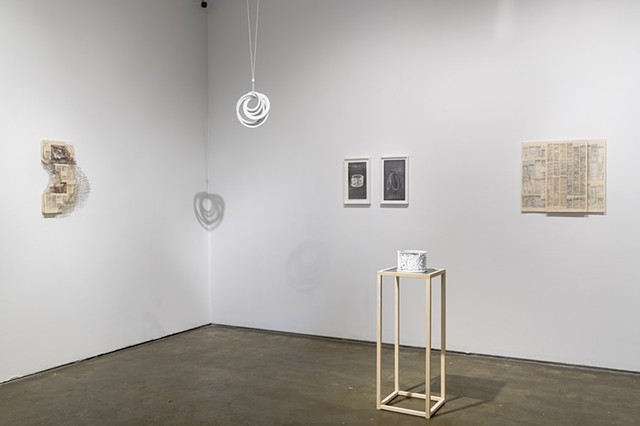 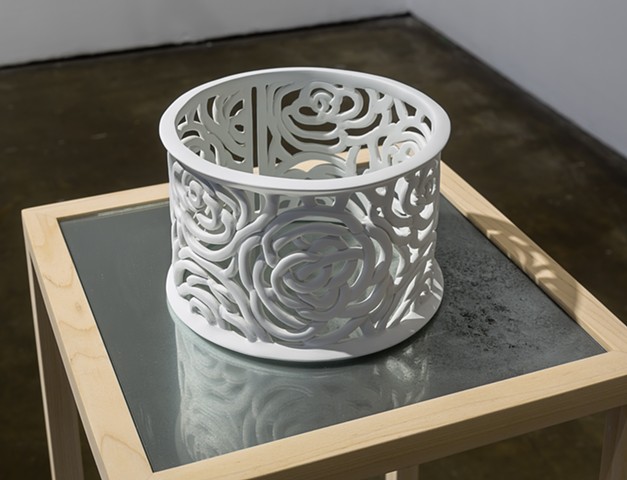 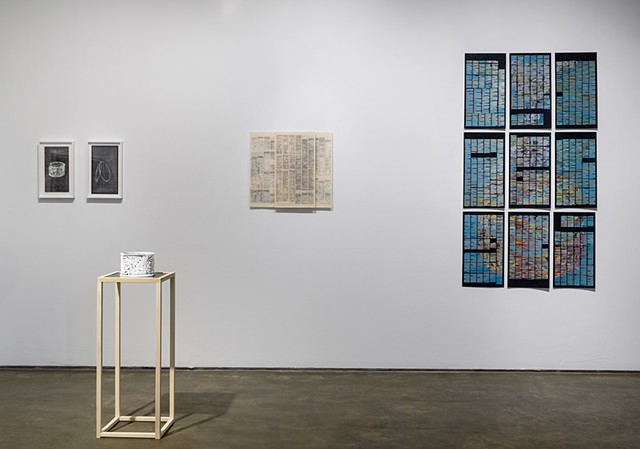 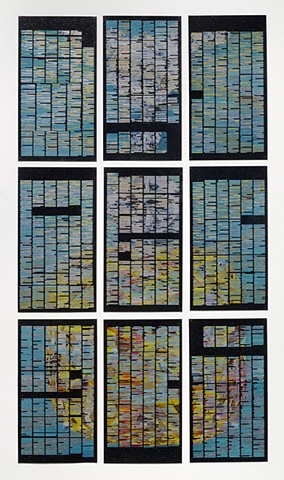 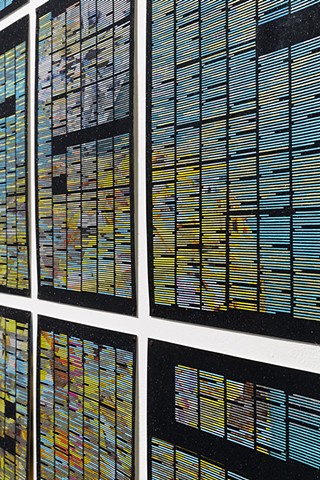 Detail of Tiffany and the Shower of Gold (After the Myth of Danae)
screen print, pigment print, glittler, gouache, metallic pigment

Smack Mellon is pleased to present Shanti Grumbine’s intricate cut-paper works, silkscreens, and sculptures. The chosen works coalesce around the theme of Zeroing, which refers to the recalibration of value as well as the action of aiming a gun at a target.

Grumbine began collecting the first and second pages of the New York Times several years ago when a struggle with neurological Lyme Disease left her unable to absorb the text. She responded to her condition by methodically redacting all the words on the pages—an action that conjured themes of censorship, marginalization, bias, and subjectivity. With the text gone, the ads placed carefully alongside the headlines loomed large. Their arrangement and images suggested an additional narrative surrounding the creation and maintenance of value. Many of the ads are for expensive accessories intended to be passed down from generation to generation, reinforcing the relationship between profit, media, and legacy.

All the works in Zeroing investigate the incredible power of combined image and language and their ability to establish value. In 1947, for example, copy editor Frances Gerety coined the phrase “a diamond is forever,” just as the diamond market was falling. With that one phrase, diamonds and engagement were united by way of an advertisement; a luxury item tethered to the quotidian institution of marriage. It’s this phenomenon—mythmaking as a unifying and mobilizing force—that creates something where there was nothing. Grumbine uses this as inspiration and presents us with a subtle call for re-evaluation and renewal.

Ultimately, Grumbine is interested in transformation: transformation of materials, content, and context. “I believe in the alchemy of creating and encountering handmade objects, while also understanding that I am unconsciously attuned to a market-driven value system. By recreating black and white ads as inverted screen prints (ghosts), I am transmuting them. By making them three dimensional, I am claiming them.”